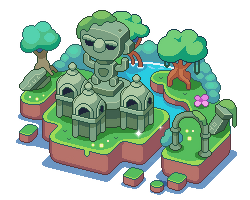 Harmony Island appears to be a jungle on its map icon, where vines and ruins can be seen to emanate the true feel of the area itself. There is a fresh blue pond behind a marble temple. There are a few trees surrounding it, on both parts of the riverside. Located on the right end of the island, there is a mossy marble arch. Green bushes border behind every other visual element on the island. The location is similar to Crystal Caverns except given a theme more closely resembling a 'jungle adventure.'

As the player enters Harmony Island, they will meet The Ancient, head of all trials that take place in the ruins. The player's goal is to break all three seals the Order has placed on her, so she can return to her true, more powerful form. To break these seals, the player must endure three separate trials. To attempt these trials, the player may participate in a Rune Run to collect runes. During a Rune Run, the player can earn various rewards such as runes and potions. After six runes are collected, The Ancient will allow the player to attempt to defeat her in one of her three trials. As a reward for breaking one of the seals by reducing her health to 0 hearts, the player will get an Ancient Relic. After that, the player must do the same 2 more times. After the second update she shows her true form, and then the player has to battle her 3 more times to get the Ancient Statue and the relics.

Community content is available under CC-BY-SA unless otherwise noted.
Advertisement